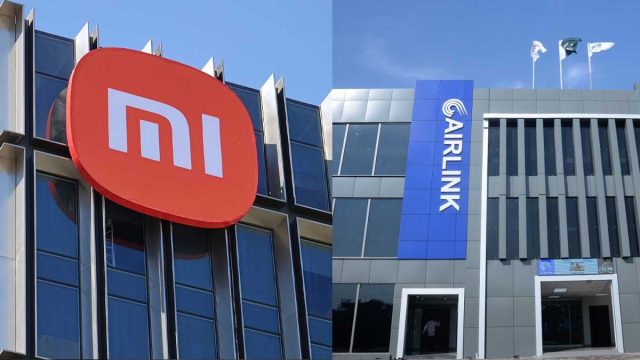 The Federal Minister for Energy Mr. Hammad Azhar in a tweet informed that the world’s second-largest mobile manufacturer Xiaomi has partnered with Airlink Communications to start smartphone manufacturing in Pakistan.

The tweet reads that the Chinese electronic giant is entering a huge Pakistani market for mobile exports with a planned investment of $500 million. 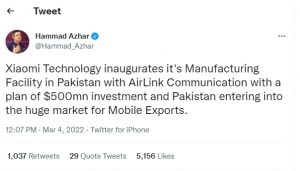 As per details, the China tech giant Xiaomi has joined hands with Select Technologies (Pvt) Limited, a wholly-owned subsidiary of Air Link Communication Limited, as its manufacturing partner for Xiaomi mobile phones in Pakistan.

The development comes days after Air Link announced that it’s ready to begin production of Xiaomi handsets in the country. In addition, the initiative is expected to produce a sales volume of $550 million per year while creating thousands of jobs in Pakistan.

What is Air Link?

Air Link Communication Ltd., one of the largest smartphones distributors, manufacturers, and retailers in Pakistan has been in the distribution business for the past 10 years working with top smartphone brands like Samsung, iPhone, Huawei, Xiaomi, Alcatel, TCL, Tecno &amp; iTel. The company has been a strong proponent of investment in Pakistan and has established the factory with 100% owned equity with a production capacity of six million units per annum.

Airlink has a nationwide extensive network connected with over 16+ hubs & Regional offices, 1100 + wholesalers, and 4,000+ retailers with after-sales support service centers in all major cities of Pakistan.

Xiaomi is one of the world’s leading smartphone companies. It’s a consumer electronics and smart manufacturing company with smartphones and smart hardware connected by an IoT platform at its core. In August 2021, the company made the Fortune Global 500 list for the third time, ranking 338th, up 84 places compared to 2020.