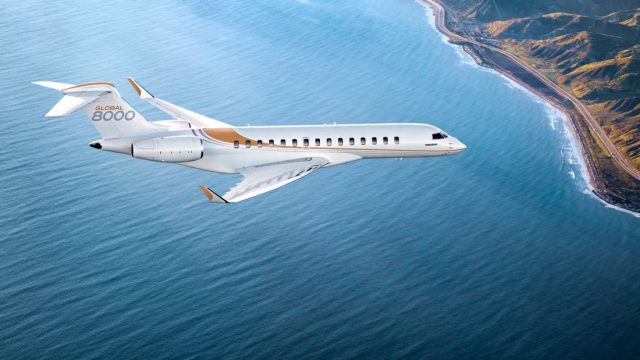 Nearly two decades after the retirement of Concorde, The race to resume supersonic passenger flights was offered a glimmer of excitement when plane manufacturer Bombardier revealed high-speed achievements while confirming the launch of its new business jet.
The Canadian company said the Global 8000 (in development) will be the world’s fastest and longest-range purpose-built business jet.
The upcoming plane will hopefully enter service in 2025 with a capacity for up to 19 passengers, a range of 8,000 nautical miles (14,800 kilometers), and a top speed of Mach 0.94. (according to a statement from Bombardier.)

The aircraft was accompanied by a NASA F/A-18 chase plane. And it has become the first Transport Category airplane to fly supersonic with Sustainable Aviation Fuel (SAF).

With a cabin altitude equivalent to 2,900 feet. The upcoming aircraft has already begun flight testing on Global 7500 flight-test vehicles. Which had broken the sound barrier during a demonstration flight last May.

As United Airlines had also announced last year that it could be offering supersonic routes in 2029. (after it struck a deal to buy 15 supersonic jets). Boom Supersonic has been attempting to complete testing on its X-B1, a prototype of overture Jet. The aircraft will allow 65 to 88 people to travel and fly over 500 mainly transoceanic routes at Mach-2.2 speeds.