WhatsApp is exceeding the maximum of 500 group chat members. The software is now working on allowing you to add up to 1024 participants in a single group chat.

The feature has already begun to be rolled out to beta testers, implying that it will be generally available soon.

The new WhatsApp version was discovered, as usual, by the feature tracker blog WABetaInfo. According to their most recent findings, WhatsApp has expanded the group member restriction once more, allowing users to add up to 1024 members in a group conversation rather than the previous 512.

The screenshot below demonstrates what’s to come. 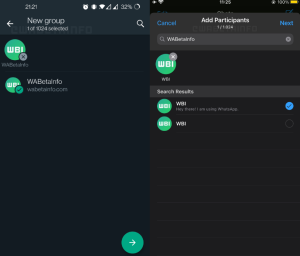 The functionality, as shown in the screenshots, is accessible on both the Android and iOS beta versions of WhatsApp, but it is limited to a set amount of beta testers. If you have the most recent beta version of WhatsApp. You can try the feature by forming a group and adding up to 1024 members to it.

If you don’t have it, it’s probably just a small test, like the Argentina beta test earlier this year, which allowed you to upload up to 2 GB of files on WhatsApp. Initially, this was only available to a small number of beta testers.

However, it will take some time before it becomes generally available on WhatsApp Beta. And even longer until it reaches the regular version of the app.

Most people have no need for 1000 group members, thus it will be overkill for the masses. It will largely be limited to large organizations or other communities that deal with a huge number of individuals on a daily basis.