WeCash is a lending app with alleged Pakistani origins but international roots. Not to add that it remarkably resembles other illegal apps on the Google Play Store.

The information was once more provided by Intelligence Analyst Zaki Khalid, who posted a thread on Twitter detailing WeCash’s dubious business practices.

Since its launch on the Google Play Store in September 2021, the app has had over 100,000 downloads, including 40,000 in just June 2022. On the app store, it presently has a rating of 2.8/5 stars, with the majority of the reviews criticizing the difficulty in getting loans.

The publisher of the app goes by the name Le Thuy Dung, which is a common female name in Vietnam. The creator also created a Vietnamese-named loan application, however, it is no longer in use. Instead of Pakistan or Vietnam, the developer’s Facebook profile has three administrators who are all headquartered in China. 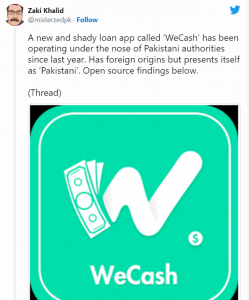 The app’s policies also include inconsistencies. WeCash claims that it may divulge any information to other parties, although its Google Play Store disclaimer categorically forbids it from doing so. The developer doesn’t give a means for you to ask to destroy your data, according to a statement on its Play Store website.

In his post, Zaki makes a good point by stating that the app might be extremely risky if it were installed by a government official or an army officer since confidential data may be at risk.

In order to get an official response on the subject, authorities contacted Zaki. He said:

“The majority of them are “white label” apps with a Chinese base or provenance. Through sponsored films created by amateur bloggers. They collaborate with people in Pakistan to promote their applications to the population there. These applications profit from Pakistan’s lax regulatory framework and lack of data protection legislation”.

If Google or Pakistani authorities take any action against WeCash or other like applications, it is yet to be seen. Authorities tried to contact the app publisher, but there has been no response. There is no method to get in touch with them on their own website.