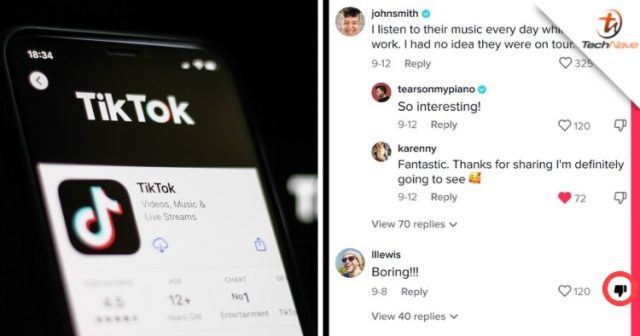 TikTok will now allow users to downvote comments on short videos – similar to other video platforms – through a thumbs-down icon.

🔔 New feature incoming. Earlier this year, we started to test a new way people could identify comments they believe to be irrelevant or inappropriate. After some testing, we're releasing it globally. 📲 Read on for 3 fast facts

A thumbs-down button will appear next to the like option on an individual’s comment. Users can click that button to dislike and change their feedback by tapping the same button again. It is only the user who can downvote. However, the number of likes is visible to the public.

As per the tweet by TikTok Comms, the purpose of adding the new feature is to hear feedback from the community directly. It will allow the platform to foster the comments section for better interaction.

TikTok, known in China as Douyin, is a short-form video hosting service owned by the Chinese company ByteDance. It hosts a variety of short-form user videos, from genres like pranks, stunts, tricks, jokes, dance, and entertainment with durations from 15 seconds to ten minutes.

CxO Global Forum is a for-profit organization founded in Jan 2019 to build a knowledge-sharing platform for Global Thought Leaders, this is the largest C Level network in Pakistan. Members from USA, UK, KSA, UAE, Canda & Pakistan are part of the Forum and contributing to the knowledge economy.