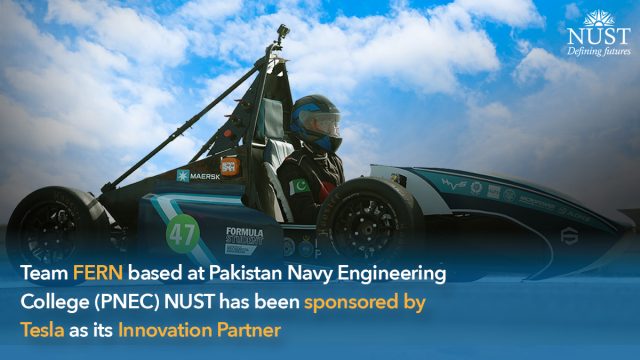 Formula Electric Racing NUST (FERN) is an NUST university program that consists of young students that aim to improve and create the world’s first racing electric vehicle. Tesla Inc., a multibillion-dollar electric vehicle manufacturing giant, has joined FERN as an innovative partner. Despite the fact that FERN has many other worldwide partners, this is by far the program’s most significant accomplishment.

This sponsorship is given to Formula Student teams from all around the world by Tesla. FERN is the first and only team from Pakistan to receive this honor. Aside from technical support, Tesla will give FERN a 5000 euro discount on enepaq tinybms, ADI & TI, bms chips, and dev boards. FERN is a well-known Formula Student team from Pakistan Navy Engineering College, which is one of NUST’s member colleges.

Since 2016, the team has been working on electric propulsion. It has had the distinct honor of representing Pakistan in five Formula Student competitions, with the lone podium finish for any Pakistani team. FERN is also the first team in Pakistan to work on driverless vehicles. The relationship with Tesla will undoubtedly help FERN achieve greater success in the global automobile market.