The multinational technology-driven ride-hailing service was formed in Cairo and has headquarters in Dubai, began trading on the NASDAQ in the US on Thursday 31st March 2022. The company is valued at $1.5 billion.

The co-founder and chief executive officer of Swvl, Mostafa Kandil, made things official for the IPO by ringing the opening bell at the NASDAQ office in Times Square, New York.

Swvl’s chief financial officer, Youssef Salem, said, “It was quite incredible. Everyone was just so incredibly excited.”

This marked the completion of Swvl’s merger with Queen’s Gambit Growth Capital, which is the first special purpose acquisition company that was founded and is run entirely by women. The development took place following an extraordinary general meeting of Queen’s Gambit’s shareholders that was held on March 30, 2022. The combined company has changed its name to Swvl Holdings Corp.

The Class A ordinary shares and warrants of the combined company will continue to trade on NASDAQ, the American Stock Exchange, based in New York under the ticker symbols “GMBT” and “GMBTW”, respectively. From this point on, Swvl’s Class A ordinary shares and warrants are expected to commence trading on NASDAQ under the ticker symbols “SWVL” and “SWVLW”, respectively. 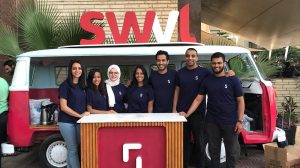 Mostafa Kandil, Swvl Founder and CEO, said, “Completing our business combination with Queen’s Gambit is a tremendous milestone for Swvl and for sustainable mass transit globally. Mobility and the empowerment that comes with it should be a fundamental right for all. As a public company, we plan to build on Swvl’s exponential growth to date and proprietary tech-enabled platform, ensuring that underserved populations have access to solutions that are safe, convenient and affordable. In turn, we will leverage our best-in-class team, established partnerships and proprietary tech stack with differentiated solutions.”

Swvl was launched in Pakistan as a tech-driven ride hailing service in the year 2019. The service operates on B2C, intra-city travel including Karachi, Lahore, Islamabad and Faisalabad, inter-city transportation in more than 20 cities, as well as B2B for corporations.

Customers can book their rides on an easy-to-use proprietary app with varied payment options, and 24×7 access to high-quality private buses and vans.