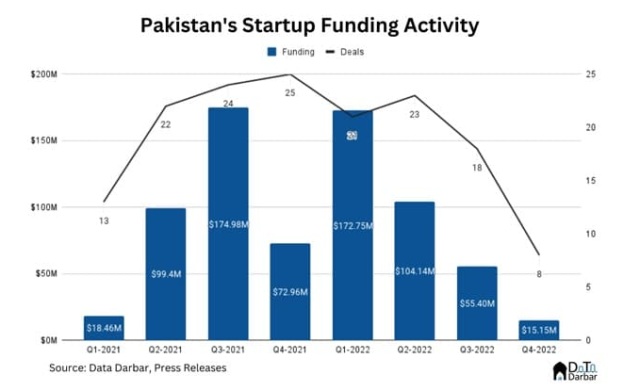 According to data made available by Data Darbar, investment in Pakistan’s ICT industry continued to decline in Q4-2022, falling to just $15.15 million. Since Q1 of 2020, when investments totaled $5.025 million, this quarter has been the worst for startup funding.

Compared to 18 deals in the preceding quarter, the deal count decreased by 55.57 percent on a quarter-over-quarter basis.

According to the industry breakdown, e-commerce held the top spot for fundraising value in 2022, with $190.27 million raised across 16 deals. The amount raised in 2021 was higher at $174.6 million. Fintech had the most transactions, totaling $100.3 million across 19 transactions. Healthtech brought in $15.1 million, while the transportation and logistics industry brought in $28.1 million.

According to the stage-by-stage breakdown, Series A fundraising in 2022 was $133.5 million, followed by Seed funding at $83.35 million and Series B funding at $80 million.

Profits from Top 100 Pakistani Companies on the Rise – Bloomberg