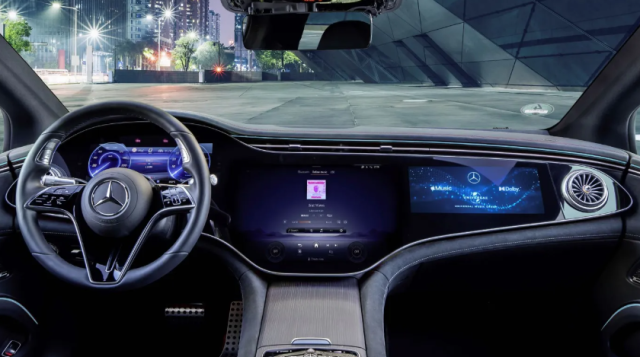 The newest instance of Apple’s entry into the automotive industry is the company’s partnership with Mercedes-Benz and Universal Music Group. To deliver its immersive surround-sound audio product to automobiles.

Starting with the Mercedes-Maybach S-Class and Mercedes-Benz S-Class as well as its expanding lineup of electric vehicles. The EQE sedan, EQE SUV, EQS sedan, and EQS SUV. Spatial Audio with Dolby Atmos from Apple Music will be natively incorporated into the vehicle for the first time.

In the spring of 2021, Spatial Audio, which gives music more depth, clarity, and space, made its premiere. On Dolby Atmos-capable Apple hardware, such as the iPhone, iPad, Mac models, AirPods, and Beats headphones. With an H1 or W1 processor, it was initially turned on by default.

Mercedes-Benz owners can now pay a fee to access what Apple refers to as the “gold standard of sound.” Owners will require two things: a Mercedes vehicle outfitted with either the Burmester high-end 4D or the 3D sound system, and a $9.99 monthly Apple Music subscription. The cost starts to skyrocket at that point.

Costing $4,550 is the Burmester 3D system. Six 3D speakers that project sound from above are part of the more expensive Burmester 4D sound system. Which costs $6,730. It also contains four near-ear speakers in the front seats. An 18.5-liter subwoofer, eight sound transducers (two per seat), and two amplifiers.

Oliver Schusser, vice president of Apple Music and Beats, said in a statement that “sound quality is extremely essential to Apple Music. Which is why we are so happy to be collaborating with Mercedes to make Spatial Audio on Apple Music available natively in the automobile for the first time.”

The firms claimed that as part of the arrangement. Universal Music Group will permit recording artists to base their song clearance process on how the final mix sounds in a Mercedes-Benz. And is establishing a seal that reads “Approved in a Mercedes-Benz” as “a gold standard of sound.”

The partnership, which was unveiled on Sunday at the Paris Motor Show, is just another indication of Apple’s interest in the automotive industry. Apple’s next-generation CarPlay system will run the whole instrument cluster of the car, according to a statement the company made earlier this year. Putting it once again head-to-head with Google’s Android Automotive OS in-vehicle operating system.

Trend Shifts Might Have an Effect on Life in 2023

China develops the greatest magnetic field in the world