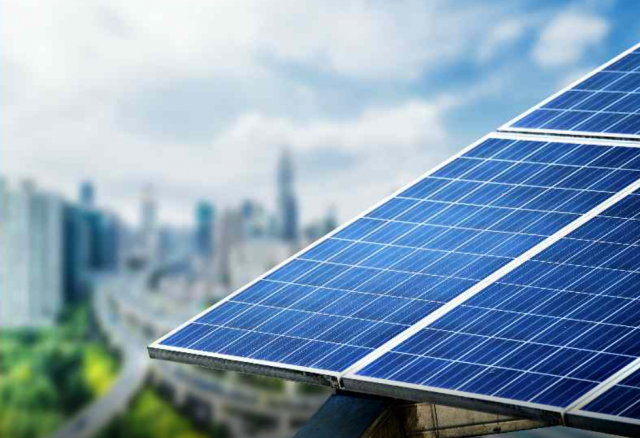 Solar PV facilities with a combined capacity of 8,000 megawatts is expected in Pakistan by 2030.

Based on an average 50MW plant, this equates to 160 solar PV plants. Positioning of Solar PV systems is ideally close to the point of consumption to save money, transmission assets, and losses.

Although solar PV is a solution that promises energy self-sufficiency in the long run, it is land-intensive. The worry is that it will divert valuable land away from critical uses such as agriculture, housing, and so on. Furthermore, land near energy consumers is typically costly, resulting in an increase in solar energy costs.
As a result, any strategy that avoids this land diversion may be appreciated. Solar-on-water (SoW)/Solar-on-canals and other water bodies are well suited for this use.

Pakistan is one of the world’s 36 water-stressed nations, with the lowest annual precipitation in South Asia of 464 mm, which is only one-third to one-fourth of the equivalent average number in South Asia.

Furthermore, per capita water availability has been decreasing by the day, and it may reach a low of 500 cubic metres per year by 2025, classifying Pakistan as a water-scarce country.

The only option to enhance net water supply is to improve water efficiency, which entails minimising water leaks and losses while also improving output.

Pakistan’s water production is one-third that of India. Water loss is also significant. Evaporation and conveyance losses are the two most significant forms of water loss.

In Pakistan, evaporation and related losses calculations are at 15 million acre feet (MAF), compared to a total water supply of 193 MAF (there may be some variance in data depending on the data year and source).

If water availability is enhanced, reducing water loss should be a significant goal.

Pakistan has one of the most extensive canal irrigation systems in the world. Evaporation losses are mostly due to the water bodies such as dam reservoirs and canals. Reduction of evaporation losses is possible by shading of these bodies of water by the sun.

Two technical approaches for accomplishing this are floating solar and canal-top solar PVs.

Pakistan has numerous significant reservoirs/dams. Such as Tarbela and Mangla, several others, such as Bhasha and Munda. While others, are in the development stages. Deployement of floating solar PV occurs on the surface of these bodies of water.

A World Bank project to construct floating solar PV atop the Tarbela reservoir has sat dormant for quite some time. According to reports, it is currently under implementation.

Three huge storage reservoirs, Tarbela and Chashma on the Indus River, and Mangla on the Jhelum River are prominent components of Pakistan’s irrigation system, as are 19 barrages, 12 inter-river link canals, and 43 separate irrigation canal commands.

It might even be double that amount. Assuming 10% utilization, the minimum true potential might be 6,240MW or more. The potential looks to be enormous.

In theory, installing solar atop canals and aquatic bodies may meet all land requirements. However, due to a number of limits, utilization all of this potential may not be possible, nor is there any necessity to do so.

Canal solar has a number of advantages. Firstly, otherwise usable agricultural land is saved. Secondly, land costs are saved, though this is offset by higher steel structure costs. Thirdly, electricity is produced near agricultural and rural users who would otherwise not have access to electricity due to being off the grid. Fourthly, reduction of transmission and distribution costs involving a low voltage grid is possible. Fifth, there is water efficiency in the sense that water is available in canals for washing solar panels. And recycling of excess overflow water to the canal processes without any formal arrangements. Sixth, installation of relatively smaller inverters at short distances is to draw electricity at small intervals.

Floating solar PV on water reservoirs/dams has the added benefit of combining with hydropower and smoothing power supplies. Co-use of hydroelectric plant transmission infrastructure will also be accessible.

There may also be some limits. Canal orientations may or may not permit a southerly direction. The lining of some canals may not be present, necessitating regular cleaning, and preventing installations in such circumstances.

The facilitation of maintenance work requires a parallel road. All of these tend to raise costs or have an impact on efficiency.

Wapda designed a floating power plant in 2015. To be on the Tarbela reservoir. As part of a World Bank technical assistance program for Tarbela expansion.

Later on, the list of destinations added Ghazi Barotha, Khanpur Dam, and Attock. Recently, an EOI for consultation (design and construction supervision) on a 300MW power plant project.

Pakistan’s solar ambition for 2030 is roughly 8,000MW. Solar-on-canals look to have a market potential of 1,000MW by 2030, depending on site difficulties and land pricing.

It might more than double between 2030 and 2040. The floating solar on Tarbela reservoir is under development as a model plant in this category; the creation of a solar-on-canal facility model will test its viability in this category. This work should allow the GOP to formulate a policy in this area.

After a lengthy period of waiting, it appears that solar-on-water is a concept whose time has come. Pakistan looks to be on the right road.

The author is a former member of the Planning Commission and the author of several works on the energy industry.