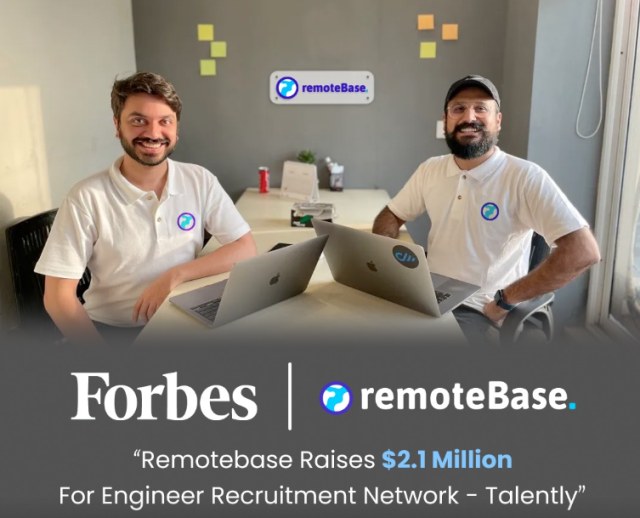 Businesses and technical recruiters have historically disagreed about how to handle the hiring of developers. The question of how to hire the best developers while spending wisely on their salaries is still up for debate. As it introduces the developer hiring tool Talently, recruitment marketplace Remotebase announces a $2.1M fundraising round as a solution to this problem.

Indus Valley Capital and Hustlefund Ventures jointly led the pre-series A, which also included Soma Capital, Angel Squad, Draper University Ventures, and angel investors from Redis and Careem. With this round, investors contributed $2.1 million, giving Remotebase a total of $65 million.

Silicon Valley-caliber top developer teams that are prepared to start working for any client within 24 hours are available through Remotebase. In order to accomplish this, Remotebase uses targeted hiring procedures to bring on the top programmers and engineers. The latest offering from Remotebase to anyone looking to hire the greatest developer talent is the new recruitment tool, Talently.

Talently offers IT recruiters and hiring managers access to more than 60,000+ pre-screened developer profiles while also assisting developers in finding the best career prospects. Companies can save hundreds of hours by using the app to quickly identify the developers who are the closest match for their requirements and arrange interviews with those professionals.

“Building and developing our platform from just 11 engineers to today over 60,000+ over 2.5 years has certainly been fulfilling,” stated Qasim Salam, CEO of Remotebase. With Talently, we hope to democratize employment and give millions of people in developing nations access to the best prospects on the planet.

It’s difficult to find coders for a number of reasons. A well-known market intelligence company, IDC, claims that by 2025, there will be up to 4 million developers worldwide lacking access to experienced engineers. The extended duration and high expense of the hiring process are additional problems that make it more challenging to find qualified tech candidates.

Workable claims that the average time to hire a developer is 42 days, albeit this time may be extended further based on the candidate’s notice period. The toughest part is having to go through the difficult hiring process again if you don’t find the appropriate candidate. In order to get rid of the onerous tech hiring culture, Talently completely alters the game by hiring and onboarding exceptionally competent engineers.

With exceptional coding talents in more than 100 different programming languages, including Python, React, JavaScript, Java, Node.js, Android, Swift, PHP, Angular, C#, Ruby, and many others, Talently has quickly built up a large talent network of international developers. It is an agile app for locating totally remote development jobs that match your skills or for hiring excellent remote workers.

The way Talently operates is through subscriptions. For a nominal monthly charge starting at $499, business recruiters can gain full access to hundreds of premium developer profiles.

Qasim Asad Salam and Talha Masood launched Remotebase after realizing there was a chance to revolutionize the IT employment process by providing a distinct competitive solution. They first co-founded a software company and a method for tracking the performance of engineers. After Covid fundamentally altered the way people work, the founders decided to take responsibility for the placement of their engineering teams and began pursuing business opportunities within their network with an offer of pre-vetted engineers available for placement in 24 hours.

They began to receive favorable feedback and, in a short period of time, realized there was a great need for tech skills. Fortunately, their prior startup experience had given them the skills necessary to discover, hire, train, and monitor the performance of software developers. When they made the decision to scale this up, things took a turn for the better, and Remotebase came into being.

During the pandemic, there was a huge surge in the demand for remote tech personnel. The number of unicorn firms and billion-dollar clients that Remotebase worked with quickly increased from just one to several, including Northwestern Mutual, Fireflies.ai, and Fabric. Inc., etc. Since then, Remotebase has expanded and now offers a wide range of development tools, apps for tech professionals, and remote working solutions.

“We have always believed that talent has no borders, and if opportunities were to be equally shared with everyone across the globe, creating a fast track channel to match opportunities with the best resources, the fusion of skills and ideas will result in a tremendous tech revolution that would elevate the standards of the tech industry beyond our expectations,” said Talha Masood, the CTO of Remotebase. For tech recruiters, hiring managers, and CTOs who are always looking to hire the most dependable IT talent and want to avoid the pricey inconvenience of technical exams, Talently is fantastic news.

According to early reviews, the B2B markets have given the app positive feedback, and it appears that Talently will soon overtake similar apps in other markets and countries as the go-to source for IT recruitment.

According to Tim Draper, a Remotebase investor: “Talently has the potential to revolutionize the hiring process of software talent worldwide. Companies and developers alike can use it to overcome regional limitations and improve hiring procedures.”

APICTA Awards Intends to Strengthen the IT Sector in Local Economies