Schedule of the day

Most importantly, the group discussion was based on three questions that paved the way for some very significant recommendations:

Question1: How to Improve Coordination Amongst Different Police Organizations on a National Level Using Technology?

Question 2: How to Improve Industry-Police Collaboration?

Question3: How to Achieve Standardization in Criminal Databases?

Technology plays a vital role to initiate reforms, the National Police Bureau (NPB) will act as a steering force, and AFIGP to coordinate the formation of such forums.

Furthermore, there should be a technical mechanism, one level below the IGs to increase connectivity and assigning of dedicated officers to be ensured to make continuous efforts.

Permanent two-tier teams should be formed, the IT Team and supervision team ensuring proper implementation of police officers coordination mechanism and AFIGP to ensure the follow-up of the team formation, its roles, and functions.

Moreover, the National Police training management board should own and endorse for swift execution to create synergies and bring everyone aboard.

For the industry police collaboration, it was recommended by the discussants that a committee be formed with a dedicated focal person to build connections between industry and law enforcement agencies.

Law enforcement agencies should connect with the IT and Cyber Security Committee at FPCCI, PSEC, and PASHA.

Above all, the incubation centers can be used for building software and testing, and finding means for practical policing.

Moreover, it was also recommended that to ensure proper management of committee and teams’ goals should be defined along with the responsibilities and desired expectations from the initiative.

Vendor list to be considered for easy-to-track results while utilizing predictive analysis.

A glimpse of the Event: 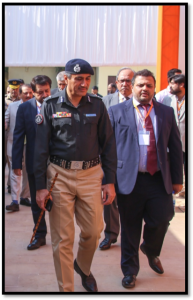 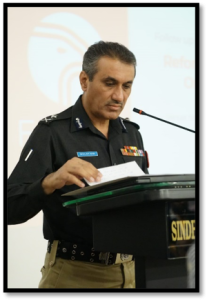 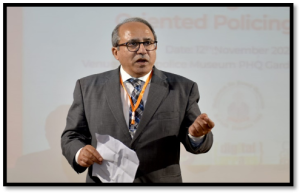 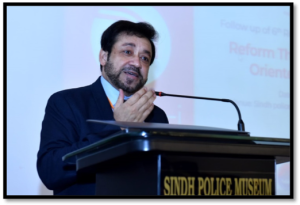 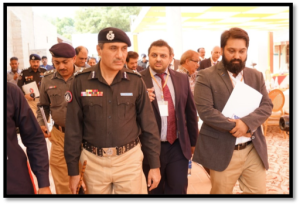 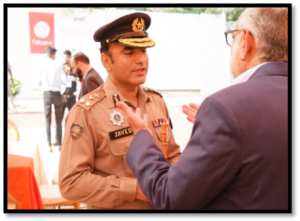 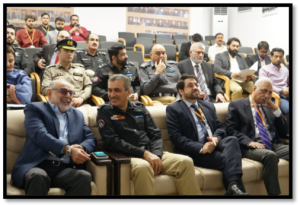 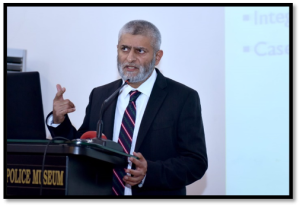 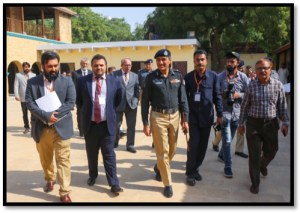 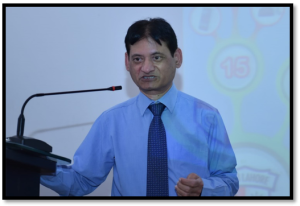 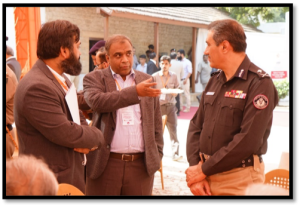 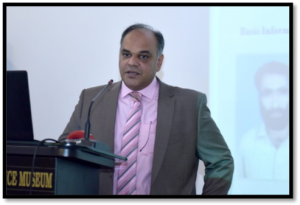 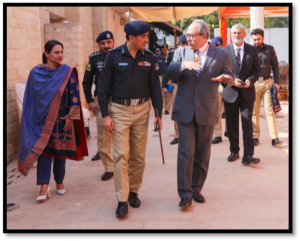 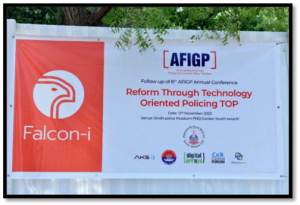 The Retired Inspectors General of Police Conference was initiated as an annual event in 2015 to discuss and debate contemporary civil law enforcement issues. The conference was aimed at improving policing in the country by synthesizing the public policy experience of retired senior officers. Moreover, the initiative led to the establishment of the Association of Former Inspectors General of Police AFIGP in May 2017, and now the annual conference is held under the auspices of AFIGP. Furthermore, the conference deliberations and outcomes are shared with Police organizations, other stakeholders, and the Government for consideration.

Since 2015, five conferences have been held on various themes from professionalism in Policing to reforms and welfare aspects:

Moreover, in the recent past, substantive efforts have been made to improve the quality of police service delivery, and policy direction in the country has been readjusted and realigned. Furthermore, The issues of dispensing justice, civil service restructuring, and police reform have consistently been expressed as priority areas by the federal and provincial governments.

It is also important to note here that the superior judiciary remained involved in civil law enforcement outlook by focusing on the need to approach police reform afresh and has supported the Police leadership in reforming Policing in Pakistan. Moreover, this coordination between Police and Judiciary through Police Reforms Committee has resulted in the formulation of recommendations on various aspects of policing. Implementation of some of the recommendations has helped in the reduction of court cases and complaints against police significantly.

The civil law enforcement landscape in Pakistan is undergoing significant changes, which are defined by diverse variables. Significantly, the country is in the process of evolving police suited for a post 9/11 world. Moreover, social structures are in major flux owing to increased urbanization, the spread of technology, massive digitalization, climate challenges, and changing economic conditions. This reality continues to interact with the ideals of justice, rule of law, and service-oriented democratic policing.

Moreover, the National Police Bureau has commenced work on a joint platform for creating and sharing digitized data on criminals and crime among all law enforcement agencies. The centralized and integrated automated system will maintain digital data vigilantly and enhance investigative & operational policing efficiently. There is an increasing challenge to the standardization and replication of software and integration of databases of all police organizations.

In addition to these positive developments, it is also becoming clear that Policing in the 21st Century has to change its form from manual to digital frameworks. Police are one of the most progressive public sector organizations in Pakistan mainly due to the introduction of technology and digitalization by almost all Police organizations.

In this background, the Reform through Technology Oriented Policing TOP Conference will deliberate and debate how technology is changing the Police business. Will it only be a change in the form and/or would it change police working and culture in a substantial positive manner? How standardized software and integrated digital platforms would affect efficiency and service delivery? The focus of the conference will be to evaluate different initiatives, proposals, and developments primarily in the area of information technology, and to solicit inputs for consideration by police leadership and policymakers.

The Conference was scheduled to be held in April 2020 but was postponed due to unavoidable circumstances of the pandemic. The one-day Conference would now be held on Saturday, May 14, 2022, at National Police Academy NPA Islamabad. The Conference Program is attached. AFIGP Executive Committee Elections would be held in the last session.

The Association of Former Inspectors General of Police AFIGP General Body, in a meeting held on May 14, 2019, in Islamabad, passed the following Resolutions:

Acknowledging that the rapid development of technology means plays a significant and central part in the criminal justice system;

Recognizing that technology is a key enabler of the efficiency and effectiveness of contemporary policing. Police organizations in Pakistan require to adapt and integrate appropriate technologies to negotiate complex challenges of policing in country.

Furthermore, it is resolved that police organizations in Pakistan invest in the acquisition and integration of technologies. Which will help in enhancing service to the people and the performance of the policing functions

It is further resolved that the AFIGP encouraging national approaches to technology investment, establishing future capability requirements, and realizing shared benefits of innovative, reliable, secure, and up-to-date technologies conduct a consultative conference at Karachi with technology experts and stakeholders to assess needs and appropriateness and suitability of the acquirable technologies for the above purposes.

Recognizing the unswerving commitment of outgoing office bearers of AFIGP to its objectives in course of their tenure; and

Acknowledging invaluable timely contributions made by outgoing office bearers of AFIGP.  They did it for the cause of the AFIGP, and the police in the wider interest of the people

Moreover, It is resolved that a note of thanks be offered to the outgoing office bearers of the AFIGP.

Policing in the 21st Century must migrate from manual to digital frameworks. Law enforcement organizations in Pakistan require to adapt and integrate appropriate technologies. In this way, they can handle the complex challenges of policing in the country. Simultaneously, it has been realized that police organizations in Pakistan need to actively invest in acquisition and integration of technologies. So that they can enhancement of services to the people and policing functions.

Against this background, The Retired Inspectors General of Police Conference was initiated as an annual event in 2015. Where they discussed and debated contemporary civil law enforcement issues. The initiative led to the establishment of the Association of Former Inspectors General of Police AFIGP in May 2017. The annual conference is held under the auspices of AFIGP. The conference deliberations and outcomes are shared with Police organizations, other stakeholders, and the Government for consideration.

However, this year’s theme for the AFIGP annual conference was “The Reform through Technology Oriented Policing TOP”. Shortly, the conference deliberated on technology and its impact on police work and culture in a positive manner. Obviously, the benefits of standardized software and integrated digital platforms. And indeed their effect on the efficiency and service delivery of the police force.

To further the deliberation and discussion a consultative follow-up conference on AFIGP annual theme is being organized by Falcon-i in Karachi at Sindh police Museum PHQ Garden South, on November 12th, 2022, with industry experts and stakeholders to bring about practical solutions to create secure and reliable technology solutions.

Moreover, The focus of the conference would be on public-private partnerships employing technology as an enabler in:

Furthermore, Falcon-i is the pioneer in the tech industry in developing innovative products. And above all, it has equipped the police with cutting-edge technology-oriented solutions.

Former CEO of Twitter Endorsing Elon Musk on the Acquisition

Top 7 Emerging Startups in Pakistan from 2019

Pakistan Will Get $2 Billion From Qatar