Businessmen have stressed that Pakistan needed to revamp the seed sector and redefine the role of the Federal Seed Certification and Registration Department (FSC&RD).

“We need to produce larger volumes of certified seeds at affordable prices and streamline the distribution of quality seeds among Pakistani farmers,” he said.

Jawad lamented that currently, the department provided registration of varieties and certifications of seeds only.

According to him, the registration benefitted neither the breeder nor the farmer hence it was a futile exercise.

“Similarly, seed certification has become largely irrelevant for its lax implementation because farmers rely on their judgment rather than a tag issued to them,” he said.

He highlighted that companies usually obtain these certification tags from the department to avoid unwarranted inspections rather than for adding value to their businesses.

Though the amended Seed Act is an example of obedience to rich trans-national corporations, it is in compliance with the TRIPs.

Under TRIPs, the private sector taking control over the livelihood of small farmers is one of the most anti-farmer acts in Pakistan, he said. “This terrible step has worsened food insecurity in Pakistan mainly in Sindh province”.

Jawad mentioned that majority of seed companies were engaged in just the marketing of certified seeds produced by leading manufacturers.

“This is why we do not see new seed varieties more often. And technological advancement in the preservation of seeds is not progressing well in the country,” he said. “One must understand that economic stabilization in Pakistan will not be sustainable.  Unless a wider political dialogue supports it.”

Sindh Chamber of Agriculture President Miran Mohammed Shah lamented there were no agro-based projects under CPEC. 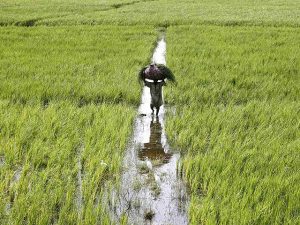 “The agriculture sector had completely ignored at the time of initiation of CPEC,” he said. “If any further development takes place under CPEC, we can include many projects including seed development.”

Similarly, water management, climate change analysis, and mechanical implements could be other areas to focus on under CPEC, he added.

Now, there are few interventions under CPEC that might help the agriculture sector going forward, he said.

He highlighted that work was in progress with Chinese companies to produce chilies in Sindh.

“We have not taken true advantage of CPEC. Because to date, we do not see China and other Belt and Road Initiative (BRI) countries as potential markets”. “Chinese firms should have invested in joint ventures for value-added horticulture exports to China and beyond.”

He expressed concern about bulging debt.

“Debt for earning is not bad. But debt for things where we are not earning more is a trap,” he said.