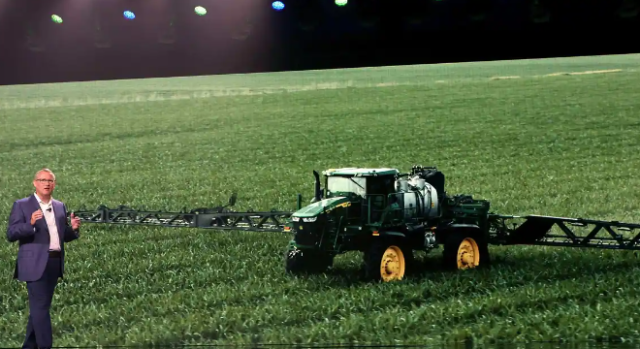 Olivier Lepine, the founder of the French start-up Brad, has created a new sensor that can give farmers real-time data on the temperature, moisture, and light levels in a field of crops. And he displayed the prototype at CES 2023 in Las Vegas, where numerous other farming-related innovations were also unveiled.

With the help of various new technologies, farmers can now make more precise decisions about when to irrigate their fields, how to use fewer pesticides, and how to treat their soil—all while saving time that would otherwise be spent traveling from field to field. Younger farmers, in particular, “want to have an influence, but also want a quality of life,” according to Lepine.

Startup in South Korea, AimbeLab, is providing a technique to monitor the contents of enormous silos. Which is for the storage of grains and animal feed in the interim.

According to Sein Kwon, farmers frequently “just use a hammer to knock into the silos to verify the sound—which is still quite inaccurate—to see how much they have left.”

A sensor created by an American start-up called Simple Labs can measure the temperature, humidity, pH level, and phenolic content of wine in a barrel or vat, which influences both flavor and color. This allows for more exact management of the aging process.

A French company called Meropy is also displaying what appears to be an alien-looking wheel with long spokes extending on either side. This wheel can roll through a field and use its cameras to image crops from all angles in order to find any weeds, pests, or diseases. Texas A&M University’s Amit Dhingra, a horticulture professor,

“The two primary forces behind the uptake of new technologies. The desire for the most affordable solutions and the need, such as when a sickness first manifests itself.

Simply put, according to David Friedberg, CEO of the agricultural technology investment business The Production Board in California, farmers need to use genomics, digitization, and data analysis to produce “more calories per acre with fewer inputs” (like pesticides).

Its newest sprayer-tractors feature enormous 120-foot (36-meter) booms with cameras every few feet and extremely quick processors, which can detect weeds even while the vehicle rumbles along at 12 mph (20 kph) and only spray where necessary.

According to Jorge Heraud, manager of automation at Deere, “instead of having to spray 100 percent of the field, we spray only approximately a third of the field, and we save on chemicals.”

The organization has also created an “Operations Center” that is accessible via computer or smartphone and gives farmers access to real-time data on their position, engine performance, and other factors, thanks to information gathered by several sensors on tractors.

Additionally, they may assess the status of seed trials and identify weed hotspots.

According to Lane Arthur, the product’s designer, “the farmer can look at the map and realize what section of the field he needs to handle differently.”

“He’s going to save some money and help the environment at the same time,”

Farmers are beginning to automate their job, much like in other sectors, according to Vonnie Estes, director of innovation at the International Fresh Produce Association (IFPA).

Data analysis, when used in conjunction with rising automation, can assist in addressing issues like labor shortages (by identifying workers on a farm), food waste in the supply chain, and greenhouse gas emissions.

Estes noted that internet connections are not always accessible or dependable in rural areas, saying, “It’s not smooth.

She added that the deluge of technical information might be intimidating. “5G is the talk of the town, but many farmers would be content with 3G,”

Pakistan’s first hand-drawn animation, ‘The Glassworker,’ makes it to the Annecy Animation Festival 2022.