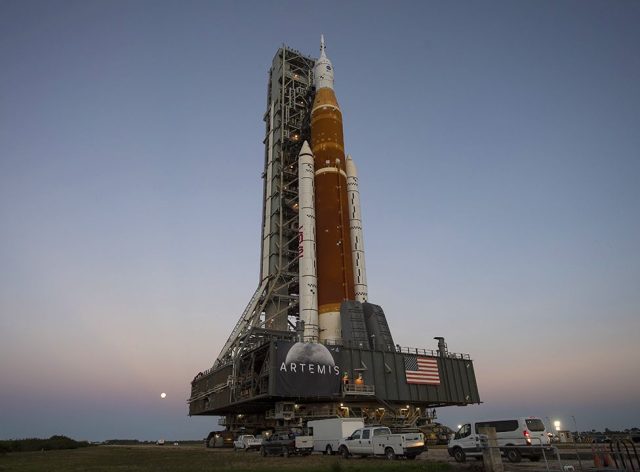 The American space agency has rolled out its new giant Moon rocket for the first time.

The vehicle, known as the Space Launch System (SLS), was taken to Pad 39B at the Kennedy Space Center in Florida to conduct a dummy countdown.

If that goes well, the rocket will be declared ready for a mission in which it will send an uncrewed test capsule around the Moon.

Ultimately, it’s hoped astronauts would climb aboard later SLS rockets to return to the Moon’s surface sometime in the second half of this decade.

These missions are part of what Nasa calls its Artemis programme.

“The Artemis generation is preparing to reach new frontiers,” he told the spectator crowds gathered at Kennedy.

“This generation will return astronauts to the Moon and this time, we will land the first woman and the first person of colour on the surface, to conduct groundbreaking science.

“Nasa’s Artemis programme will pave the way for humanity’s giant leap (to) future missions to Mars.”

Assuming everything proceeds to the satisfaction of the engineers, Nasa will then be able to set a flight date.

The end of May remains a possibility, but more likely it will be June or July.

This mission, dubbed Artemis-1, will propel the rocket’s Orion crew capsule on a 26-day journey that includes an expanded orbit around the Moon. There will be no one in the capsule for the test flight. This should happen on the second mission in a couple of years’ time.