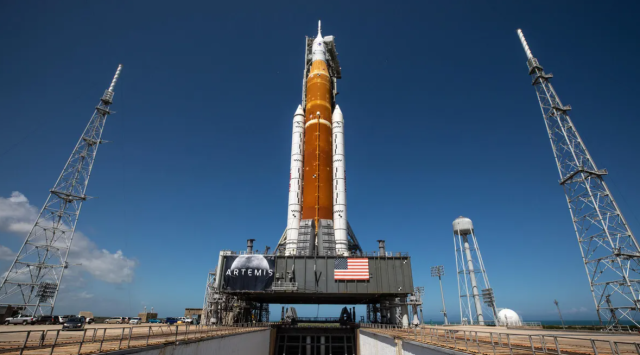 After weeks of technical difficulties and bad weather caused the unmanned first Artemis mission to the moon to be delayed, NASA said on Wednesday that Nov. 14 has been chosen as the date for a third attempt to launch its large, next-generation rocketship.

Plans call for resuming final flight preparations as early as Friday, November 4 at NASA’s Kennedy Space Center in Cape Canaveral, Florida. By moving the 32-story-tall Space Launch System (SLS) rocket and its Orion spacecraft back out to Launch Pad 39B.

After two failed launch attempts on August 29 and September 3. The space agency was obliged to return the massive rocketship to its hangar last month. Due to safety requirements and severe weather brought on by Hurricane Ian.

According to NASA, routine maintenance still needs to be completed at the launch pad. Including minor insulating material repairs, the battery recharges or replacements for the rocket, its satellite payloads, and the flight-termination system.

According to previous statements made by NASA representatives, the hydrogen fuel leak that compelled them to cancel the final countdown three hours prior to liftoff has since been fixed.

The Artemis I mission’s revised targeted 69-minute launch window begins at 12:07 a.m. EST (04:07 GMT) on November 14. Backup launch opportunities of two hours each are scheduled for November 16 and November 19, according to NASA.

The most recent set of issues in recent months come at the end of a rocket development program that has taken more than ten years to complete. Under NASA’s SLS and Orion contracts with Boeing Co. and Lockheed Martin Corp., respectively, there have been years of delays and billions of dollars in cost overruns.

After decades of concentrating on low-orbit missions with the space shuttles and the International Space Station. Artemis I marks a significant turning point for NASA’s post-Apollo human spaceflight program, despite its technical difficulties.

A half-century after the last lunar mission of Apollo, the Artemis program’s ancestor. Artemis I would be the first to launch the SLS rocket with the Orion spacecraft. It would send the Orion capsule on an unmanned test flight to the moon and back.

Aiming to send humans back to the moon as early as 2025. Artemis is named for the goddess who, in Greek mythology, was Apollo’s twin. However, many analysts anticipate that the target date to be pushed back.

In the end, NASA wants to build a permanent lunar base of operations as the first step toward even more ambitious human missions to Mars.

KeepTruckin added to Parity.org list of Best Companies for Women