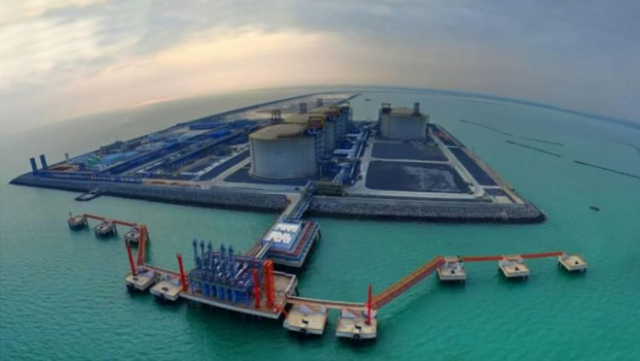 Some government officials are allegedly using their clout to ease the way for a liquefied natural gas (LNG) facility to expand its capacity, a move that could generate some controversy and threaten investment. Engro Elengy Terminal Private Limited (EETPL) is working to replace its present Floating Storage and Re-gasification Unit (FSRU), which handles LNG imports, with a larger one that can accommodate 900 million cubic feet per day (mmcfd).

EETPL’s terminal currently has an LNG handling capacity of 690 mmcfd, of which the government has allocated 600 mmcfd. The terminal is running at full capacity due to long-term LNG imports from Qatar.

Sui Southern Gas Company (SSGC), a public utility, was tasked by the previous administration with dealing with EETPL’s desire for a larger FSRU.

However, the SSGC did not support the plan. Previously, SSGC officials faced an inquiry, and sources say that granting authorization to the terminal to increase its capacity may generate more problems for the gas utility. In addition to EETPL’s terminal, Pakistan GasPort Consortium operates another such facility (PGPC). However, due to the failure of Pakistan LNG Limited (PLL) to book more cargo. It is only receiving roughly 200 mmcfd of LNG, or two cargoes every month. The government has been assigned six LNG cargoes each month at the PGPC port.

“This suggests that the country has excess LNG handling capacity and there appears to be no need to develop further capacity,” an official noted.

EETPL and SSGC are currently working under the LNG Services Agreement. Both parties would be required to open the deal if the former is authorized to expand its terminal capacity, according to sources. This could cause problems for policymakers. Energas and Tabeer Energy are also building two additional LNG terminals. In addition, in order to attract investment, the government recently reduced limits for third-party access to LNG terminals.

Qatar has also declared its desire to partner with Energas to build an LNG terminal. These plans could be jeopardized if the present LNG facility is allowed to expand its capacity, according to sources. There are some further concerns. EETPL is requesting a four-year waiver of its option and direct rights over its FSRU. During this time the option and direct rights over the new FSRU will be finalized. According to insiders, this will put all LNG stakeholders at risk owing to the lack of collateral. And will result in a higher option price for the FSRU. Because of its enhanced capacity, the government will create a monopoly if it relies solely on one terminal.

It will also jeopardize the country’s energy security if the terminal fails, they claim. EETPL did not respond to a comment request. “SSGC is required to comply with the LNG Services Agreement and will follow whatever is permissible under the agreement,” stated SSGC. It is a public sector listed corporation that is required by law to follow the relevant laws. SSGC has done so in the past and will do so in the future.

Pakistan must tap into telecom sector to power economic growth