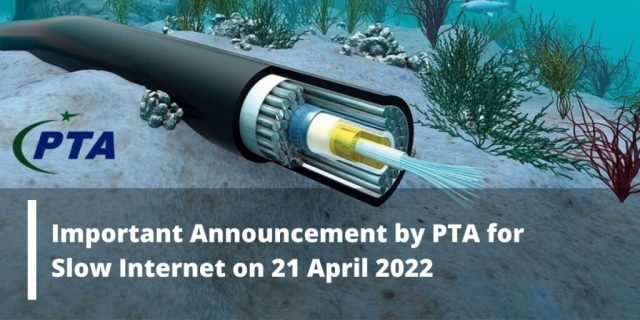 The internet users in Pakistan could face slow speed on April 21 from 2 am to 7 am, the Pakistan Telecommunication Authority (PTA) said Tuesday night.

Citing the reason for the slow speed, the PTA, in a statement, said a power reconfiguration activity on a section of international submarine cable, SMW4, will be undertaken from 2-7 am.

Noting that some internet users might experience downgraded speeds, the PTA said alternate measures to provide uninterrupted internet services to users would be taken to meet capacity requirements.

The telecommunication authority added it would work to ensure the internet starts full functionality as quickly as possible.

⚙️A power reconfiguration activity on a section of international submarine cable, #SMW4, will be undertaken on 21st April 2022 from 02:00 AM to 07:00 AM. This may cause some internet users to experience downgraded speeds during the mentioned time only.

In February, a cable cut in a submarine cable system at a distance of almost 400 km off the coast of Pakistan caused internet disruption across the country as well.

In December last year, the internet users faced a lagging in the internet connection when services were disrupted due to a fault in the international submarine SEA-ME-WE 4 cable. The issue was resolved after hours.