Intel Corporation, World’s second-largest semiconductor chip manufacturer, will introduce Core i9-12900HX CPU with 16 cores with an 8+8 configuration. This chip will be the first for Intel to offer such a high core count on the laptop segment.

The 16-core laptop CPU by Intel will feature more core and threads than the current flagship i.e. Core i9-12900HK as it offers 14 cores and 20 threads. This makes it at least 10% faster as it will offer a 14% increase in core and a 20% increase in the thread count.

With the arrival of Intel Core i9-12900HX, we will witness two additional Performance cores, the base clock on this processor will be 2.5 GHz with a boost clock as high as 4.89 GHz. It’s also expected that it will hit a 5.0GHz boost clock upon official release. Its TDP will be 55W and the GPU will have up to 32 Xe-LP cores, which is much lower than the desktop variant. 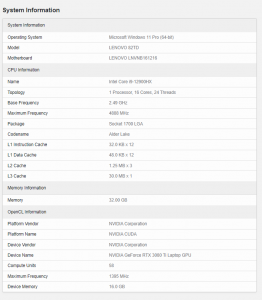 As per Geekbench results, the upcoming processor was spotted running on a Lenovo system which is equipped with GeForce RTX 3080 Ti Laptop GPU. This implies that more new flagship gaming laptops certainly be coming with this beastly combo inside.

The new Alder Lake-HX series processors will be packaged in the BGA format and there have been multiple sources that claim that this is actually the full desktop die with optimized voltages so that power is conserved and tuned for utmost performance/efficiency on laptops.

Intel Corporation, stylized as intel, is an American multinational corporation and technology company headquartered in Santa Clara, California. Intel delivers across the compute continuum and reduces complexity with purpose-designed, feature-rich silicon, open and optimized software and tools, and hundreds of preconfigured edge-to-cloud solutions.

The multinational technology company is also the world’s second-largest manufacturer by revenue of semiconductor chips, a product used in most of the world’s electronic devices. Intel’s microprocessors are supplied and used in computers at several large tech companies, including Dell, HP, and Lenovo. Intel also manufactures graphics chips, flash memory, motherboard chipsets, and other computing devices.

For all the latest updates and news, visit CxO Global FORUM

HEC, Microsoft to Revolutionize the Education Landscape in Pakistan