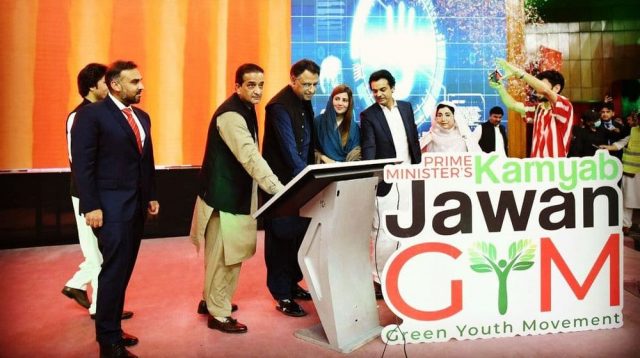 Under this initiative, the program will be executed through 137 public universities and Green Youth Movement Clubs. Green Clubs will be developed in all public sectors Higher Education Institutions engaging 2.5 million youth.

Planning Minister Asad Umar while addressing the event, the planning minister said that the government under the leadership of Imran Khan has taken several commendable initiatives to tackle the issue of climate change as Pakistan falls on the list of ten climate-hit-affected countries. He said three dams are being constructed to meet the water crises and climate issues.

Explaining about the Green Youth Movement, the minister said that this initiative will prove to be a milestone in engaging youth, enhancing their capacity building as well as skills, and approaching towards the growth of Pakistan.

Minister of State for Climate Change Zartaj Gul said that the Kamyab Jawan Program has enabled the youth towards better decision making. These programs are designed under the prime minister’s vision of producing a skilled young generation to ensure the betterment and prosperity of the country.

In his remarks, Special Assistant on Youth Affairs Usman Dar, said that under Kamyab Jawan Program 42 billion rupees have so far been disbursed among youth under different initiatives while 25000 businesses have been established. He said under GYM, over 65000 jobs will be created transparently. The green champions under the Green Youth Movement initiative will represent Pakistan in other countries and learn new approaches to address the climate change, he added.

Country Director British Council Pakistan Amir Ramzan said that the British Council is delighted to partner with the government of Pakistan on Kamyab Jawan’s Green Youth Movement. It is the initiative that will define the future of our youth, he remarked.

The British Council will invest 2.8 million pounds to support the Green Youth Movement initiative, whereas the Pakistan government has already invested Rs. 238 million for this much-needed initiative.

NASA’s new telescope gets struck by a huge micrometeoroid