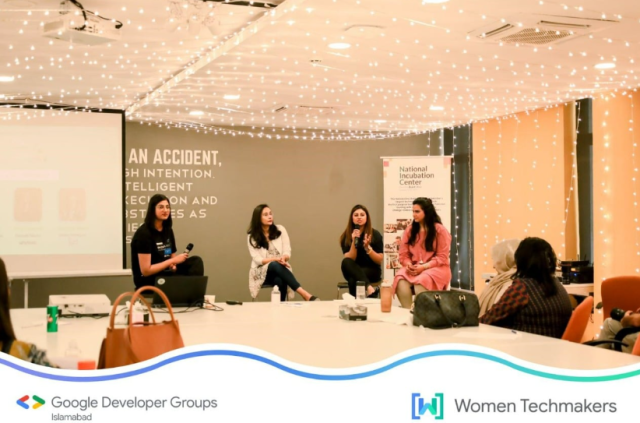 Through a series of Women Techmakers events held this year, more than 800 women developers in Pakistan got training.

The events, which were part of the International Women’s Day (IWD) celebrations, addressed vital subjects including internet safety, coding, and presenting skills.

This year’s International Women’s Day theme is #ProgressNotPerfection, which aims to celebrate the advancement of women in all of its forms rather than holding to outdated ideas of success and failure.

In keeping with the theme, the Women Techmaker sessions by Google included motivational female speakers who shared their experiences with overcoming obstacles in their personal and professional lives, as well as networking events that allowed female participants to network with more people in the sector and create new opportunities.

Google actively works to celebrate the accomplishments of women in tech and encourage more women in Pakistan to pursue a career in technology, according to Farhan S. Qureshi, regional director for Pakistan, Bangladesh, and Sri Lanka at Google. “The Women Techmakers ambassadors did an outstanding job organizing beneficial and beneficial activities for the female developer community this year.

We hope to see more women in IT take the initiative and set an example for other females.
WTM Ambassador in Karachi, Hira Tariq, stated:

According to comments, the Women Techmakers seminars energized the female communities. And gave many women the self-assurance to face challenges on their own journeys. In keeping with the hashtag #ProgressNotPerfection, we have hopefully contributed to the dissemination of the idea that it is acceptable for women to fail. And that we should celebrate the small victories we achieve for the community of women.

In celebration of IWD, Google has organized thousands of Women Techmakers events in more than 75 countries since 2013. Furthermore, our goal is to create an environment where all women may succeed in the IT industry. Through these events, we support the visibility, community, and resources of women in the industry.