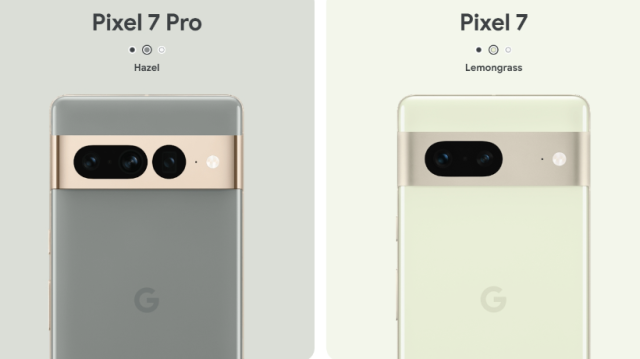 On October 6, along with the Pixel Watch and Pixel Buds Pro, Google Pixel 7 and Pixel 7 Pro became announced. The second-generation Tensor chip from Google powers the two phones, which also have numerous camera enhancements.

The new Pixel phones share a lot of similarities in terms of appearance, although obviously, one is larger than the other. The camera visor from last year is still present, but this time it is constructed of metal and is one continuous strip that extends to both ends. The camera strip on the Pixel 7 sports a matte finish, while the Pixel 7 Pro opts for a glossy appearance.

A flat 6.3-inch AMOLED screen with 1080p resolution and a refresh rate of 90Hz is included on the standard Pixel 7. It can reach a peak brightness of 1400 nits and supports HDR10+. The 6.7-inch curved LTPO AMOLED panel in the Pro variant is larger and boasts a 2K resolution and 120Hz refresh rate. 1500 nits make it significantly brighter.

The Tensor G2 chip, which Google independently created and is based on Samsung’s 4nm technology, powers both phones. Although it offers marginally greater CPU and GPU performance, its AI and machine learning capabilities are vastly improved. This makes it possible for functions like Photo Unblur, which can correct all of your blurry photographs with the click of a single button. Additionally, it enhances camera performance.

For the Pixel 7, there are 8 GB RAM and 128 GB or 256 GB storage options, but the Pixel 7 Pro offers up to 12 GB RAM and 512 GB storage. Both will run Android 13 and will receive 3 years of OS updates and 5 years of security patches, according to promises.

On the back of the Pixel 7, there are only two cameras. The primary camera has a 50MP 1/1.31″ sensor with optional 4-in-1 binning, and the secondary camera has a 12MP ultrawide sensor. The Pixel 7 Pro features the same 50MP main camera as the Pixel 7, but it has a better 12MP ultrawide shooter with autofocus that allows you to snap macro images as well. The final sensor is a 48MP telephoto lens with 5x optical zoom.

Both phones offer optical image stabilization on the main camera and can record 4K footage at 60 frames per second. Google also includes Apple’s Cinematic Mode, called the Cinematic Blur. On both phones, the selfie camera is a 10.8MP ultrawide snapper.

Cancer vanishes from every patient for the first time in history

Twitter Blue will cost $8 and be required for verification: Elon Musk