The powerful News Feed on Facebook is being divided in half. It is announcing today the addition of two feeds to its iOS and Android apps.

The tab you see when you launch the app now goes by the name “Home,” and it’s made for the algorithm-based discovery of Reels, Stories, and other tailored content. Then, a brand-new Feeds tab appears, with the most current updates from your friends, groups, favorite Facebook Pages, and other users—there are no “Suggested For You” postings to be found here.

The two tabs will be available through the Facebook app on iOS and Android, where they will begin to show up in the shortcut bar today.

According to a press release from Meta, the tabs users spend the most time in will determine what is displayed on this bar; however, users can pin tabs to keep them in place. Over the course of the upcoming week, the business anticipates rolling out the changes internationally. 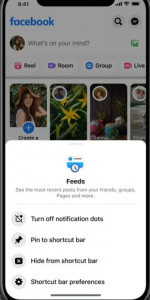 The CEO of Meta, Mark Zuckerberg, announced the changes in a Facebook post, writing that “one of the most requested features for Facebook is to make sure people don’t miss friends’ postings.” So, as of today, we’re introducing a Feeds tab where you can view postings individually and in chronological order from your friends, groups, Pages, and more.

On the Home page, the app will still open to a tailored feed. The discovery engine will suggest the articles we believe you’ll find most interesting. However, the Feeds tab will provide you with further customization and control over your experience.

This split in the feed appears to be an attempt to strike a balance. Between Facebook’s historical focus on the accounts and pages that people actually follow. Meta’s desire for it to resemble TikTok. Which suggests content from across its platform based on what its algorithms

Making the recently renamed Home feed the default, however, reveals Meta’s ambitions for Facebook. Meta claims that the feed will eventually develop into “more of a discovery engine.”

The Home tab will still display updates from friends and family. But they will have suggestions determined by a machine learning rating algorithm. This is crucial to highlight. Ads will also continue to appear in the Feed tab. It, therefore, appears that there will be some crossover between the two.

Apple to Raise App Store Prices in some Countries