Elon Musk, the billionaire founder of Tesla, has put his $44 billion acquisition of Twitter on “pause,” generating further concerns about whether he would proceed with the deal.

Musk tweeted early Friday that he wanted to know how many spam and false accounts there were on the social media network. He has been open about his desire to address Twitter’s problem with “spambots” that impersonate actual people, and he appeared to wonder if Twitter was underreporting them.

However, the business has warned in regulatory filings that their bot estimates may be low for at least two years, prompting some analysts to conclude that Musk is highlighting the problem as an excuse to withdraw from the deal.

“Twitter deal currently on hold for data supporting computation that spam/fake accounts do comprise fewer than 5% of users,” Musk tweeted Friday morning, indicating that he is doubtful of the estimate.

Musk later tweeted on Friday that he is “still committed to acquisition.” On Friday, neither Twitter nor Musk responded to calls for comment. Musk has had a lengthy relationship with Twitter, which resulted in an April purchase deal. 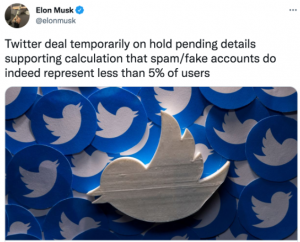 Twitter acknowledged questions about its bot account count in its quarterly filing with the Securities and Exchange Commission, admitting that the number may be low. “Because we used substantial judgment in reaching this assessment, our estimate of false or spam accounts may not correctly represent the real number of such accounts. The actual number of false or spam accounts may be larger than we have estimated,” the statement said.

A check of Twitter’s SEC filings reveals that the company’s estimate of spam-bot accounts and similar wording indicating concern about it has been in Twitter’s quarterly and annual reports for at least two years, long before Musk made his offer.

According to Sara Silver, a Quinnipiac University professor of business journalism and financial communication, Musk appears to be using the number of spam accounts as an excuse to withdraw from the deal.

Twitter and Tesla stock fell drastically in opposing directions on Friday, with Twitter plummeting 9.7 percent and Tesla, which Musk has suggested using to help pay the Twitter transaction, jumping 5.9 %.

However, shares of Tesla, which Musk has been selling to fund a portion of the Twitter takeover, have fallen since it was reported that the social network had become Musk’s target.

Tesla shares had lost a quarter of their value in the previous month, dropping from $1,150 in early April, when Musk disclosed he had purchased a significant position in Twitter, to $769.59 on Friday.

Buying this firm with his Tesla shares has become substantially more expensive for him.

A researcher at the University of Maryland recently determined that such bots were employed to produce hundreds of thousands of nice tweets about Tesla, perhaps boosting its stock in years when it was under pressure.

Tesla or its supporters have not claimed responsibility for the bots.

Musk has already sold more than $8 billion in Tesla stock to help finance the Twitter acquisition.

Wedbush analyst Dan Ives, who monitors both Tesla and Twitter, described Musk’s statement as “bizarre,” adding that Wall Street is doubtful. “The street perspective is that he’s looking for an excuse to either bargain down the sale price or walk,” Ives added.

If the agreement falls through, Musk may be required to pay a $1 billion breakup fee.

He went on to say that Musk’s decision to make the news through Twitter rather than a financial filing was concerning, as it “turns this whole purchase into a circus show with numerous doubts and no firm answers as to the direction of this acquisition moving forward.”

Fishry.com and Paymob Partner to build an inclusive e-commerce ecosystem for SMEs in Pakistan