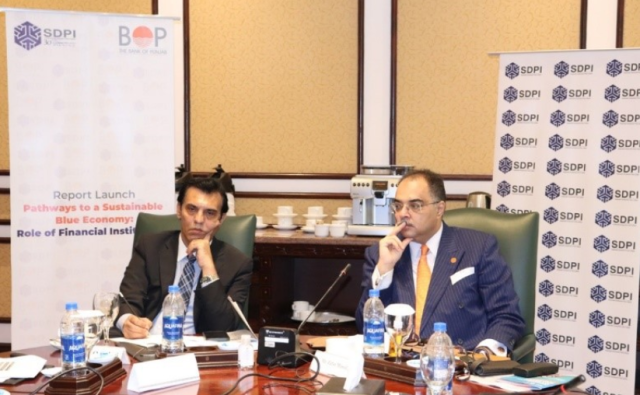 The Sustainable Development Policy Institute (SDPI) and the Bank of Punjab (BOP) together hosted the report “Pathways to a Sustainable Blue Economy: Role of Financial Institutions” launch ceremony at the Serena Hotel in Islamabad.

The immense potential of the blue economy to contribute to economic growth and improvements in living standards has not been fully understood by policymakers in Pakistan and around the world, according to Mr. Zafar Masud (President & CEO – BOP).

The marine industry offers a considerable chance to satisfy the short- to medium-term need for external financing. By increasing fish exports, offering coastal tourism, and raising money through Green and Blue bonds on exceptionally favorable terms (compared to plain vanilla Sukuks and Eurobonds). The market for sustainable bonds is thought to be worth $1 trillion globally. China and India have seized the lead in the issue of global sustainable bonds. Raising a combined total of more than US$ 12 billion each. Through ESG and Green bonds, the corporate sector in India raised close to $10 billion USD in 2021.

While Pakistan’s first green bond issue in 2021 was a success, a broader pipeline must be built by identifying green assets. And expanding capacity to match global standards. Marine biodiversity is being lost at a substantial cost. This is due to climate change and the overuse of our blue natural resources.

According to global investment patterns, which Sayem Ali (Divisional Head & Chief Economist – BOP) brought to the attention of the attendees, China and India raised $ 12 billion each through the issue of green bonds, mostly by their respective business sectors rather than the governments. Pakistan has a chance to capitalize on the expanding ESG market. And we have already done so with the 2021 issue of a $ 500 million green bond.

Dr. Vaqar Ahmed (Joint Executive Director – SDPI) proposed creating an online tracker of blue investments for both in-process and potential investments. He said that this would help uncover opportunities. As well as problems that would be obstacles to the development of the blue economy.

He continued by saying that appropriate and targeted infrastructure investment in this region could help to reduce the recent flooding. Communities whose livelihoods depend on the blue resources are also being harmed, which is causing unemployment and poverty to increase. According to him, the blue economy makes up 0.45% of the country’s GDP, or $1 billion. He also mentioned that Pakistan’s maritime industry faces challenges related to governance, technology, marine pollution, and the destruction of mangroves.

He cited the $5 billion in annual revenue that coastal and marine tourism can produce.

According to Dr. Abid Qaiyum Suleri, Executive Director of SDPI, the blue economy has enormous untapped potential and calls for unconventional solutions. He asserted that building a port alone, without a port city, would not significantly boost the economy. And that instead, we should concentrate on establishing laws and regulations for trans-shipment. Making our ports green, and otherwise reversing the course of these ports. He also suggested expanding sea liners and insurance coverage in the industry, something India has already done. To promote marine tourism and lessen the reliance on fossil fuels for in-land freight.

Maritime tasks were distributed to the provinces after the 18th Amendment, according to Kamran Farooq Ansari, Joint Secretary of the Ministry of Maritime Affairs. Which led to a lack of agreement on policies and projects. The Ministry of Maritime Affairs, he claimed, is actively developing measures to advance the industry. In order to entice private sector participation in this industry. He advocated for modifying the mercantile marine rules and suggested providing incentives and tax exemptions.

The World Bank’s Senior Environmental Specialist, Ms. Rahat Jabeen, stated that the Ministry of Maritime Affairs and the World Bank are working together to develop a blue economy roadmap.