NASA, the American Space Company, has announced that it has extended the flight operations of the Ingenuity Mars Helicopter through September.

The announcement comes on the heels of the rotorcraft’s 21st successful flight, the first of at least three needed for the helicopter to cross the northwest portion of a region known as “Séítah” and reach its next staging area.

History’s first aircraft to operate from the surface of another world will support the Perseverance rover’s upcoming science campaign exploring the ancient river delta of Jezero Crater.

Commenting on the recent development, Associate Administrator of NASA’s Science Mission Directorate, Mr. Thomas Zurbuchen said; Less than a year ago we didn’t even know if the powered, controlled flight of an aircraft at Mars was possible. Now, we are looking forward to Ingenuity’s involvement in Perseverance’s second science campaign. Such a transformation of mindset in such a short period is simply amazing, and one of the most historic in the annals of air and space exploration.” 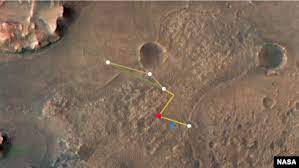 Ingenuity’s new area of operations is entirely different from the modest, relatively flat terrain it has been flying over since its first flight last April. Several miles wide and formed by an ancient river, the fan-shaped delta rises more than 130 feet (40 meters) above the crater floor.

Filled with jagged cliffs, angled surfaces, projecting boulders, and sand-filled pockets that could stop a rover in its tracks (or upend a helicopter upon landing), the delta promises to hold numerous geologic revelations – perhaps even the proof necessary to determine that microscopic life once existed on Mars billions of years ago.

Upon reaching the delta, Ingenuity’s first orders will be to help determine which of two dry river channels Perseverance should take when it’s time to climb to the top of the delta. Along with routing assistance, data provided by the helicopter will help the Perseverance team assess potential science targets.

Ingenuity’s chief pilot is Håvard Grip. He noted that the continuing flights are quickly filling up a book he uses to record each trip. He said when the mission started, he thought he would be lucky to record five flights. “Now, at the rate we’re going, I’m going to need a second book,” Grip said.