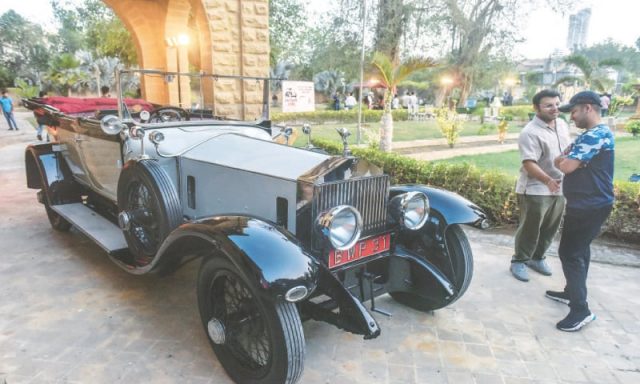 All the top antique car collectors of the country were there at Pakistan’s first online Antique Cars Museum at the Quaid-i-Azam House Museum.

All the top antique car collectors of the country were there along with their prized possessions. When Pakistan’s first online Antique Cars Museum was launched at the Quaid-i-Azam House Museum.

Karim Chhapra was there with his salvaged 1924 Rolls Royce Silver Ghost. In this, the Quaid-i-Azam, too, had traveled when it was originally owned by the Nawab of Bahawalpur.

He shared his views about having an online museum for vintage and classic cars of the country. He said that there was a need for it for a very long time. “We the collectors of these cars had even been promised land for the purpose of having a classic cars museum in Karachi. Which never happened. So since we don’t have the land, we can at least have an online museum,” he said.

Liaquat Malik, another classic car collector, was there with his 1961 ivory white Mercedes 190 SL and his cheerful bright yellow 1951 MG TD. He said that it was the time of social media, therefore such a museum was the need of the hour. “We will showcase our car heritage before the world,” he said.

Mansoor-ul-Islam is famous for recreating classic cars with his own hands. He arrived with his ivory 1938 Rolls Royce Wraith. He also thought that having such a museum was a brilliant idea.

Shoaib Qureshi is the owner of the online museum. He said the idea came to him some two-and-a-half years ago during the Covid-19 lockdowns. “We often do classic car shows to share our hobby and our beautiful cars with the general public. But we wanted a single platform for this purpose where most of our cars could be showcased. This is the first Pakistan online museum for antique cars. Where we can show the best of these cars is not just to our country but also to the world,” he said.

“Look around you,” he said, pointing to the Porsches, Jaguars, Rolls Royce, Mercedes, etc., parked in the u-shaped parking lot of the Quaid-i-Azam House Museum.

“We have so many gems here. Starting with 80 cars, the website antiquecars.com.pk will showcase 100 cars at a time as we want to maintain quality over quantity. The oldest car there is the 100-year-old 1922 Amilcar C4 from Islamabad. And the youngest one is a 35-year-old 1987 BMW two-door coupe from Karachi. We also have the two cars of Miss Fatima Jinnah, a 1955 Series 62 Convertible Cadillac and a 1965 Mercedes Benz 200. He said this while gesturing to the two cars parked in their glass garage right there the following restoration by the president of the Vintage and Classic Car Club of Pakistan, Mohsin Ikram.

Other cars in the collection include globally rare, iconic, and valuable antique cars such as:

Besides showcasing the classic cars and sharing their history on the museum website. They will also have branded merchandise in the form of T-Shirts, caps, etc.